Binna Burra rises from the Ashes

The iconic hinterland eco-tourism destination re-opens a year after the devastating 2019 bushfire.

The re-building of the beloved Binna Burra Lodge has been a decidedly hands-on affair for senior management of the iconic eco-tourism venture.

I spent an idyllic Gold Coast winter morning touring the 34-hectare property with chairman of the board of Binna Burra Lodge Steve Noakes while he weeds, prunes and picks up rubbish everywhere he goes.

On Sunday evening, Steve and Binna Burra CEO Jonathan Fisher will be camping out on the property with the sons of Binna Burra founder Arthur Groom, Tony and Richard, now in their 80s, to “absorb the spirit of Binna Burra” as Steve puts it.

In this way, they hope to preserve the original vision of the mountain-top eco-tourism venture first conceived by Arthur Groom and his business partner Romeo Lahey back in 1933 as they prepare to re-open and re-build after the devastation of the 2019 bushfire.

Surrounded by Lamington National Park, Binna Burra has operated as a kind of “membership club,” Steve says, its original 97 shareholders now swelling to over 800. Many of the original shareholders were returned servicemen and women from World War One, suffering from Post-Traumatic Stress, drawn by the stunning natural setting as a form of therapy and healing from the ravages of war. Now Binna Burra itself is healing from the ravages of bushfire, the tell-tale shoots of new life sprouting from tree trunks and birdsong once again ringing out through the forest.

Almost a year ago, on the early morning of Sunday, September 8, it was a very different picture, an unseasonal and unprecedented September bushfire raging through what was once thought to be fire resistant, moist rainforest left parched and tinder-dry by prolonged drought.

The fire destroyed many of the historic buildings and miraculously spared others. They lost 42 out of the original 43 timber-slab cabins, the lodge itself, library and kitchen, while most of the modern Sky Lodges, the historic barn and Grooms Cottage, the original home of the Groom family, survived. 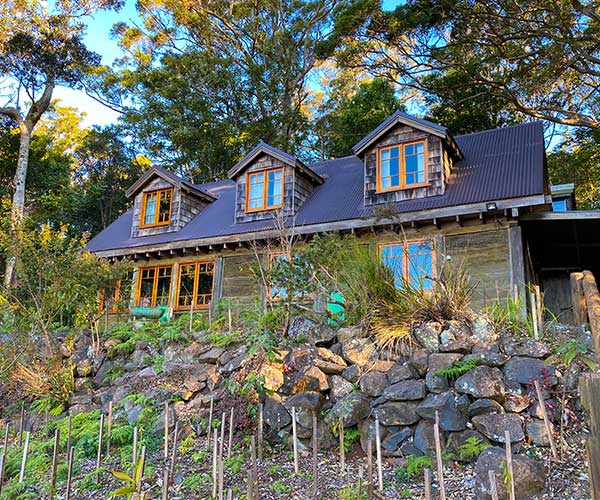 Grooms Cottage, the original home of the Groom family, survived the fire 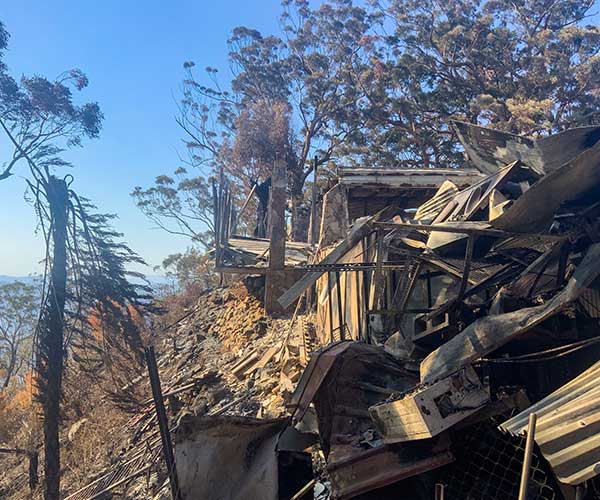 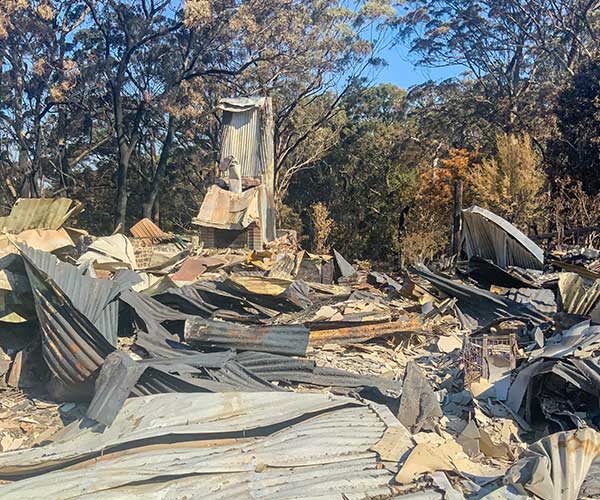 Twelve months on, an army of tradies are working around the clock to prepare for the re-opening, 87 years after Binna Burra opened for the first time. The modern, luxury Sky Lodges will open on September 1, the campground and teahouses on September 14. Mercifully, generous winter rains have reduced the bushfire risk and forward bookings have been strong, in a heartening display of what Steve dubs “solidarity tourism”.

It remains a minor miracle that Binna Burra has been able to re-open at all. On the Tuesday, two days after the fire, when management were first allowed back on the fire-ravaged property, as Steve picked among the ruins of twisted iron roofing, collapsed stone walls and charred timber, the task of resurrecting this iconic hinterland eco-tourism enterprise appeared daunting. Re-building the road into Binna Burra alone has taken a year and many millions of dollars, securing the mountainside against rock slides with wire netting and concrete barriers. They had to refund $700,000 in forward bookings. They were unable to obtain adequate bushfire insurance and so the insurance pay-out they did receive will not cover the cost of rebuilding, but a crowd-funding campaign and various bushfire recovery grants has gone some way to making up the shortfall.

Work on the property began in earnest in June this year – the demolition of the burnt-out wreckage was scheduled to take two weeks but actually took six weeks. Up to 150 workers at a time have been teeming all over the property – erecting new luxury safari tents, constructing a new tea house, restoring the fire-damaged Sky Lodges and converting the Groom’s Cottage into an English-pub style walker’s bar. The surviving old barn is being re-purposed as an exhibition space documenting the bushfire. An innovative hillside climb, the Via Ferrata, or “Iron Walk” in Italian, is being constructed, a kind of “Sydney Harbour Bridge” style climb but affixed to the side of a rock face.

Local architect Tristan Schultz, of Relative Creative, has been engaged to refine the existing masterplan to incorporate a Reconciliation Action Plan, recognising the Indigenous history and culture of the region. “The living relatives of the founder of Binna Burra recognise the world is a different place than it was when Binna Burra was founded in 1933,” says Tristan. “They recognise that the histories, stories and living knowledge of Aboriginal people and culture of the Binna Burra surrounds should be a key component to the Binna Burra narrative.”

Binna Burra’s shareholders, the Friends of Binna Burra volunteers and the tight-knit community of regular guests are all passionately invested in the property and its future. Two public meetings were held to discuss the masterplan and post-bushfire re-build. New bushfire regulations dictate that they cannot build within 30 metres of a tree, or 1.5 times the height of a tree, so they can’t simply re-build what was there. “It’s an opportunity to pause and review the intensity of re-development,” says Steve.

Cabins will be replaced by tiny homes on wheels that can be moved if necessary in the event of another fire. All vehicles will be replaced by hybrid or electric vehicles when they are retired. Tesla has already donated two electric vehicle charging stations. The lodge was always the heart of Binna Burra and the re-development of that site is being carefully considered. “We’re talking about a large event space, restaurant, and rooftop sunset bar inspired by what was here before,” says Jonathan Fisher, who now faces the monumental task of re-building what was a thriving business. “Business was the best it had ever been prior to the fire,” says Jonathan.

“It’s been a bit of a struggle to keep the company alive but we seem to have done it,” says Steve. “We got a lot of publicity and brand recognition went through the roof but we didn’t have a product to sell … Now we’re getting trading going again, the Sky Lodges and camp ground are getting good demand, and we can trade our way through this.”

Steve managed to convince Jonathan Fisher to leave his role as CEO of National Trust of Australia (Queensland), responsible for the Currumbin Wildlife Sanctuary and Currumbin Wildlife Hospital, to take on the position of CEO of Binna Burra Lodge as part of a move to modernise the business. Steve describes Binna Burra’s membership model as “a tourism co-operative, and Australia’s first crowd-funded tourism venture.” Most shares were issued in the ’30s, ’40s and ’50s and have been passed down through generations of the same families.

Steve first came to Binna Burra on a school camp back in 1972 and was so taken with the place, the memory never left him. He became a leading academic in the emerging fields of eco and adventure tourism and snapped up shares in Binna Burra from former Lodge manager Linus Bagley in 2000. He joined the board in 2003 and became chairman in 2018. Steve was living and working in Jakarta, Indonesia, for the World Bank on tourism development when he first got word of the looming bushfire emergency from his wife Suzanne, who also happens to be secretary of the local volunteer Rural Fire Service. Steve was on a flight home that night.

“On the Friday my wife sent me a message, ‘I’ve locked the house, not sure if the house will be there when you get home,’” he recalls. Staff and guests were evacuated on Saturday only hours before the only road in and out was cut off. The raging bushfire engulfed the property early Sunday morning, fanned by 80km/h winds. The first glimpse anyone had of the extent of the damage was aerial footage from an ABC news report on Sunday. “It was like a Vietnam War movie, with back to back water bombers. The water bombing saved Grooms Cottage and saved Numinbah Valley and Springbrook,” says Steve.

It wasn’t until the following Tuesday that they could access the property and assess the damage first-hand. It was a sobering scene, with 80-plus years of work laid to waste and smouldering spot fires still threatening to spring to life throughout the surrounding bush. Steve recalls seeing one fallen tree exploding like a lava tube. With a large media contingent in attendance, a shift in wind direction required another hasty evacuation.

Fortunately, Steve’s home survived but 11 other neighbouring home-owners in the close-knit community of Binna Burra weren’t so lucky. His wife Suzanne and her crew were fighting fires every week for six months straight.

All that could not seem further removed from the idyllic rainforest setting we find ourselves in on this gorgeous winter morning – the sky a perfect dome of blue, the Hinze Dam, the high-rise towers of Surfers Paradise and the glistening Pacific Ocean all visible in the distance, and rolling green hills as far as the eye can see. Steve takes me on an impromptu bushwalk, his first since the fires, and is thrilled to discover a giant old Tallowwood tree, known as Big Foot, has survived the blaze, even though it is charred around its base. A memorial to the Binna Burra Lodge founders, the Lahey, Groom and Muller families also survived, a poignant reminder of the property’s rich history. 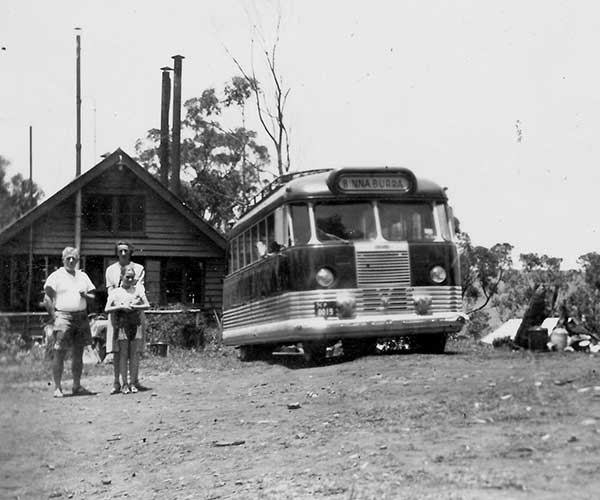 Binna Burra Bus and the Blitz 1948 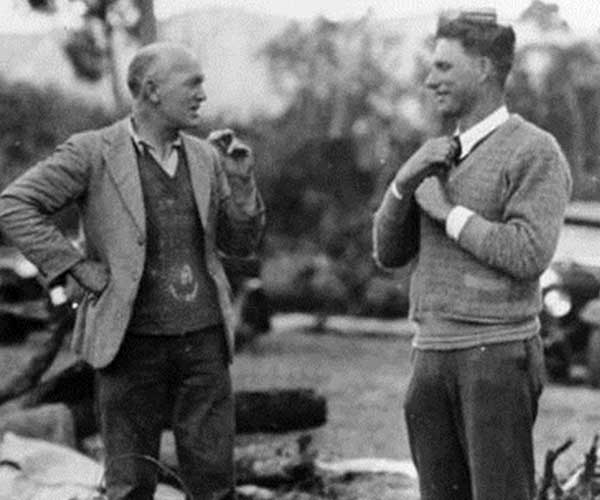 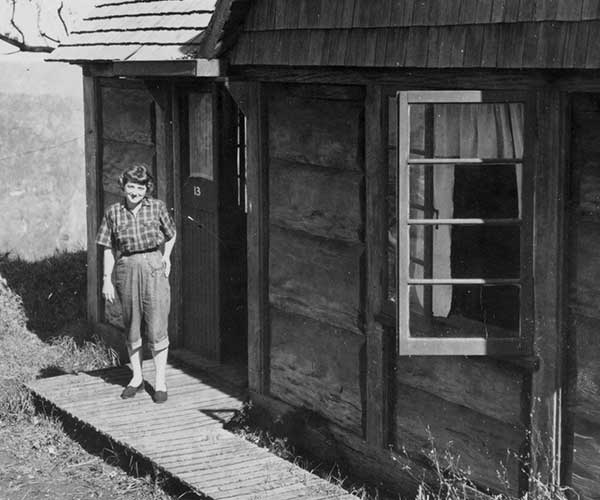 The surrounding Lamington National Park was gazetted in 1915 and co-founder Arthur Groom, a journalist and keen bushwalker from Melbourne, first dreamt of an eco-tourism enterprise here to introduce others to the magnificence of its rainforest environment after criss-crossing the landscape on solo bushwalks for many years. He was inspired by nearby O’Reilly’s Rainforest Retreat and even worked there for a time.

Once he teamed up with another bushwalking enthusiast Romeo Lacey, a timber-cutter by trade but also a pioneering environmentalist, the partnership was equipped with a potent mix of idealism and pragmatism to realise their combined dream. They purchased 34 hectares of land from dairy farmer George Rankin by selling shares in the property and set about establishing a basic holiday camp. They also formed the Queensland National Parks Association to promote the preservation of key environmental areas.

The Groom family have remained intrinsically linked to Binna Burra ever since and the fruit has not fallen far from the tree. Donn Groom founded Abseiling Queensland to introduce others to his passion for rock-climbing. His son Michael Groom is one of Australia’s best mountain climbers, having scaled the five highest peaks in the world. Tony’s daughter Lisa Groom still runs International Park Tours, based at Binna Burra, leading walking tours in Australia and Europe with the same passion for the outdoors as her grandfather.

When the first guests return to Binna Burra this Spring they will be following in the footsteps of generations of holiday makers, bushwalkers, bird watchers and environmentalists who have been drawn to this sub-tropical paradise. Historically, most of their guests have come from within a two to three-hour radius of Binna Burra so hopes are high for healthy and sustained trade even in the time of COVID. That sweet mountain air and verdant rainforests will work their magic, restoring health, providing respite from a busy world, inspiring romances and renewed connections to the natural world, as they have for decades.

The revitalisation of Miami

A morning in Burleigh Heads