Where to find glow worms on the Gold Coast

Glow worms are a stunning natural feature of the Gold Coast hinterland, illuminating the areas they inhabit like a carpet of twinkling stars.

They’re originally from Gondwana, are found only in Australia and New Zealand, and rely on dense rainforest for their survival.

Whether you’re after a romantic night trek, a family adventure or easy accessibility, there’s a glow worm spot nearby to suit you.

For a daytime tour, which might better suit small children, you can visit the Glow Worm Caves at Mount Tamborine. It’s a purpose-built cave and the tour starts with an informative video about the curious things glow worms get up to.

This is also the venue most easily accessible to wheelchairs, though some assistance might be required to get down two steps.

If you’d rather see glow worms in the forest at night in a national park, discover the Natural Bridge in the Numinbah Valley. After sunset, glow worms cover the ceiling of the cave. They’re more plentiful in the warm wet summer months.

It’s worth going in the day, as well, to enjoy the bushwalks and the cave and waterfall.

You can find Natural bridge on Nerang-Murwillumbah Road, in Springbrook. The walk is a 1.5km circuit that descends into ancient Gondwana rainforest to the Natural Bridge rock arch. During the day expect to see an abundance of wildlife and also rare and threatened species such as the cascade tree frog, tusked frog and sooty owl. At night search for glow-worms and microbats. On summer nights you might be lucky enough to see luminous fungi and fireflies. 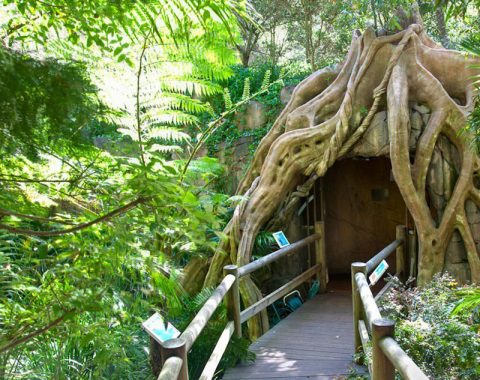 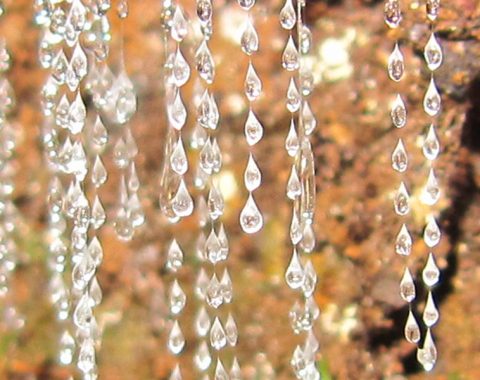 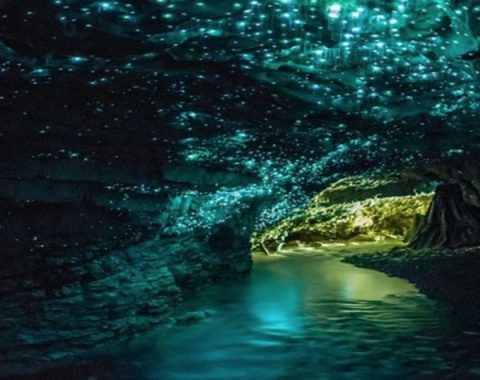 A third option is to take the O’Reilly’s tour. It’s a night-time tour, with a short bus ride and walk, to view glow worms along a tall river bank. It’s convenient if you’re staying at the guesthouse as they start at 5.30pm.

There are plenty of other attractions around O’Reilly’s, too, including a winery, friendly alpacas and stunning rainforest walks.

I asked Luke Flesher, Activities Manager at O’Reilly’s Guest House, to tell me more about their tour.

“O’Reilly’s Glow Worms live on a high creek bed, a natural cliff-face, that provides the right conditions,” Luke said. “Sitting in the middle of the rainforest, in a secluded gully, illuminated by hundreds of tiny glowing lights, it’s a truly special sight.”

You’re likely to see other wildlife on the tour, too.

“It’s not uncommon to see nocturnal dwellers such as pademelons, possums, bandicoots, frogs, insects and potentially even Carpet Pythons or a Lamington Spiny Crayfish wandering across the track,” he said. The tour leaves every day of the year from O’Reilly’s guest house.

I hit Luke with some more questions to knock out the nitty-gritty about glow worms.

What exactly are glow worms?

“Firstly, they’re not worms. Like most things that hatch from an egg laid by a flying insect, they are technically maggots. But a nicer term for that is larvae, and of course the name by which we all know them is glow worms.

“They are the larval stage of a flying insect known as a fungus gnat, an insect about the size of a mosquito. The worms themselves grow from about 2-3mm to 2-3cm long in their 1-year lifespan, during which they change from egg, to glow worm, to pupae, to fungus gnat.”

What do glow worms eat?

“They use a process called bioluminescence, a naturally occurring chemical glow in a chamber in their rear ends, to attract small flying insects, which then become their prey.

“Attracted to the light like a moth to a flame, these small insects become trapped in sticky threads strung up by the Glow Worms – an easy meal!”

“Most people associate Glow Worms with caves – the most notable natural occurrence of Glow Worms in the world being NZ’s Waitomo Caves – but they can occur anywhere conditions are right.

How were your glow worms discovered?

“The O’Reilly’s have been conducting Glow Worms tours for many decades, but not in the location they are today.

“For many years it had involved a 7km walk along the Box Forest circuit, until the early 1980s, when Peter O’Reilly was camping with his daughter along Moran’s Creek and as the sun set, much to his amazement, a new colony of Glow Worms sprung into action.

“Being just 2km from the Guest House, Peter was naturally thrilled, and this discovery also led to the creation of the Wishing Tree Track, linking the gully to the Guest House at the top of the hill.”

Do different colonies have different sensitivities to light and noise?

“Different settings can alter how sound affects them.

“Particularly in caves, where noise reverberates across the walls, people are asked to be very quiet so as not to disturb the glow worms.

“Here in the rainforest gully setting there doesn’t seem to be that effect, and we can quite happily talk loudly enough for a large group of people to hear without any adverse impact.

“Light, on the other hand, is always the enemy of the glow worm. They are delicate little creatures and direct torch and sunlight can damage them, and also send them a signal that it’s daytime, and time to switch their lights off – which affects their ability to catch a meal.”

Is there a time of year when they’re brighter or more plentiful?

“We are fortunate that our glow worms are in such a large colony as to be spectacular all year round.

“There doesn’t seem to be any synchronicity in the colony – that is, they don’t all suddenly change from glow worm to fungus gnat at the same time – so there are always glow worms to be seen.

“Certainly they enjoy the warmer, wetter months, and glow more brightly after rain, most likely as that is when their flying prey is out and about.”

Can visitors do anything to help preserve glow worms’ environment and wellbeing?

“The use of insect repellent is an obvious one – being insects themselves and hunting insects, repellent makes life very difficult for them.

“They, themselves, and the sticky threads they construct to catch their prey, are also very delicate and cannot handle being touched or interfered with by people’s hands. So by all means, enjoy the spectacle, but from a respectful distance.”

“Their scientific name is Arachnocampa.

“If you suffer from arachnophobia you have a fear of spiders…but don’t worry, these guys aren’t arachnids. Using sticky webs to ensnare their prey makes them spider-like …and Arachnocampa translates roughly as “spider-grub”.

For more information about glow worm tours, and glow worms:

The re-birth of Binna Burra

Five ways to contribute to conservation on the coast

7 short family walks on the Gold Coast kids will love!