A champion team from Gold Coast Christian College, a small yet dynamic school at Reedy Creek, is preparing to take on the globe in the F1 in Schools STEM Challenge World Finals to be held early next year.

The team which came second in the national finals held earlier this year is among the best in the world in this little-known competition that attracts competitors from 17,000 schools in 51 countries globally.

In Australia, some 22,000 students participate in the challenge and it is estimated more than 10 times that number of students are exposed to the program.

Gold Coast Christian College, a school with just 280 students across its primary and secondary school campus, was established as a hub school on the Gold Coast for the F1 in Schools competition in 2018, with the support of Federal Minister for Industry, Science and Technology, Karen Andrews.

The competition, managed by the Re-engineering Australia Foundation (REA) and supported by the Australian Government Department of Defence and the F1 organisation, has been running for the past 17 years. It is known as the world’s most competitive STEM competition where students design, build and race a miniature F1 car capable of travelling from zero to 80kmh in under one second.

The Gold Coast Christian College team, known as Dark Matter, had the fastest car in the professional category of the national competition held in March this year. The miniature car, propelled by a carbon dioxide gas cylinder typically used in a soda siphon, travelled across the 20-metre special track in 1.01 seconds.

Despite the top time, Dark Matter landed second place in the overall competition, which is judged on a range of categories including team management and marketing skills. However, it was enough to earn the students the right to compete in the world titles next year. 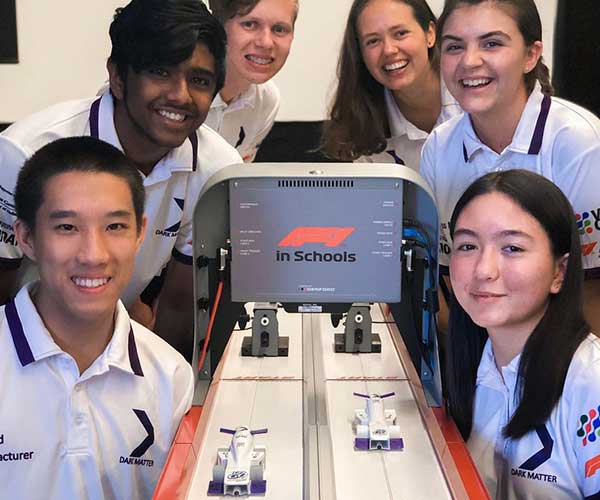 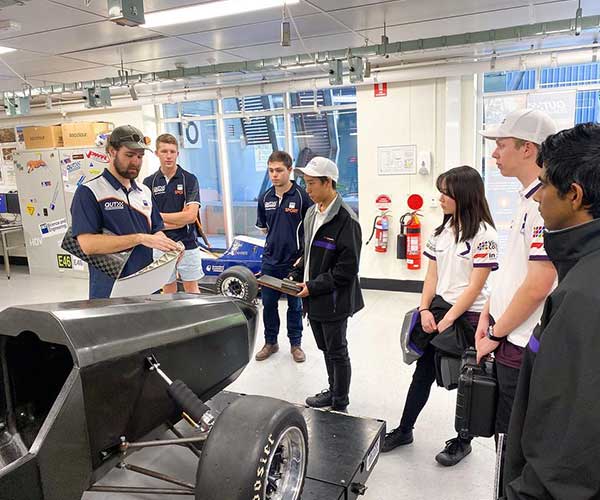 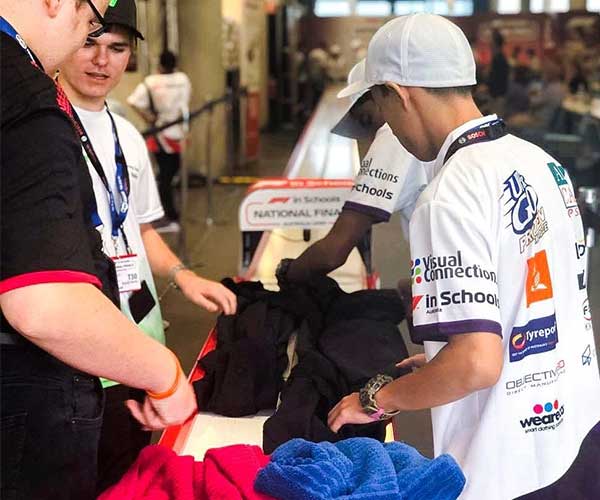 Mr Lawson says the achievements of the Dark Matter team in such a short time have exceeded expectations.

“The fact that we were in a state final with our students within six months of being in the program, it just opened our eyes to the possibilities. Now we’re up against some of the best STEM students in the world.

“What this shows is how much we underestimate what our kids are capable of and that often we don’t set the bar high enough for them.”

The Dark Matter team at Gold Coast Christian College comprises six students from Years 10, 11 and 12. They gather two to three times a week to work on the project in between their normal study commitments.

“It’s more of a STEAM project than just STEM, as graphic art and marketing are major components of this project,” says Mr Lawson.

“Students also need to market to businesses who may want to get on board and sponsor the team. Our team has done a great job and we’ve been overwhelmed with the support of Gold Coast businesses who have become involved.”

Among the major sponsors is Sanitarium’s Up & Go which has provided $10,000 in funding. A further $5000 has come from local businesses, putting Dark Matter at the half-way mark for its sponsorship target for next year’s world finals.

The world finals will be held remotely in 51 countries for the first time with Australian finalists expected to gather in Melbourne to coincide with the scheduling of the Australian Grand Prix. Speed trials and judges’ interviews of competitors will be globally connected via Zoom.

The car model is made from a single piece of balsa wood and produced using computer-aided manufacturing techniques, including a computer-controlled router to precision cut the wood and 3D printing to create various components.

Under the rules, each model must be a specific length and weight. The teams must adhere to 44 pages of rules and guidelines to avoid being issued with penalties during competition. Everything from the team’s marketing strategy, pit display, sustainability measures and even team enthusiasm is up for judging by industry professionals.

Mr Lawson says Dark Matter team members had stepped up to the challenge in many ways, demonstrating capabilities beyond their years including liaising at a peer-to-peer level with experts in various fields across the business and tertiary education sector.

“Using the software has been very helpful in developing my skills and it has already given me an edge in my pathway to an engineering career,” says Caed. “Engineering students at university don’t start using the CAD system until their second year.”

Reynold has also taken a big step by developing his own app for the team. While he had never been trained in coding, he self-taught to produce the app because the team needed it.

“Creating an app from scratch made me appreciate the time and dedication of professional developers,” says Reynold. “To have the app impact the team so positively gave me confidence to try and make more things that I would have otherwise thought too difficult or out of my level of expertise.”

Mr Lawson describes the F1 in Schools STEM Challenge as the perfect learning environment for students.

“This is exactly what education should be about – students pushing themselves to know what they need to know,” he says.
Last year, Gold Coast Christian College had half of its high school cohort, or about 70 students, involved in the program. The success of Dark Matter is encouraging more students to participate.

“They’ve seen the achievements of their mentors in the professional grade of the competition and they have a belief they can do it,” says Mr Lawson.

“Once you get to professional level, the students engage with mentors across many fields of enterprise and that has been invaluable for our students.

“To tap into people working for Ford America and companies like General Motors, there is some amazing work happening and that collaboration gives them the belief that they too can get into those types of positions.”

University scholarships are also up for grabs for successful team members in the world finals.

Australia has an enviable record in the F1 in Schools competition globally after taking out six world titles since 2006.

For Mr Lawson, there is satisfaction in knowing that students are engaging in a STEM program, pitting their talents against the best in the world and thinking creatively in the process.

“A project like F1 in Schools develops innovative thinking and that’s what I love about this STEM approach.

“For many years we’ve been on a track to get all of our students to become diligent and creative. Our aim is to grow students who love learning and to help them become self-motivated.”

Dark Matter thanks their sponsors, including a number of local businesses, for their support and mentoring for the national and world final.