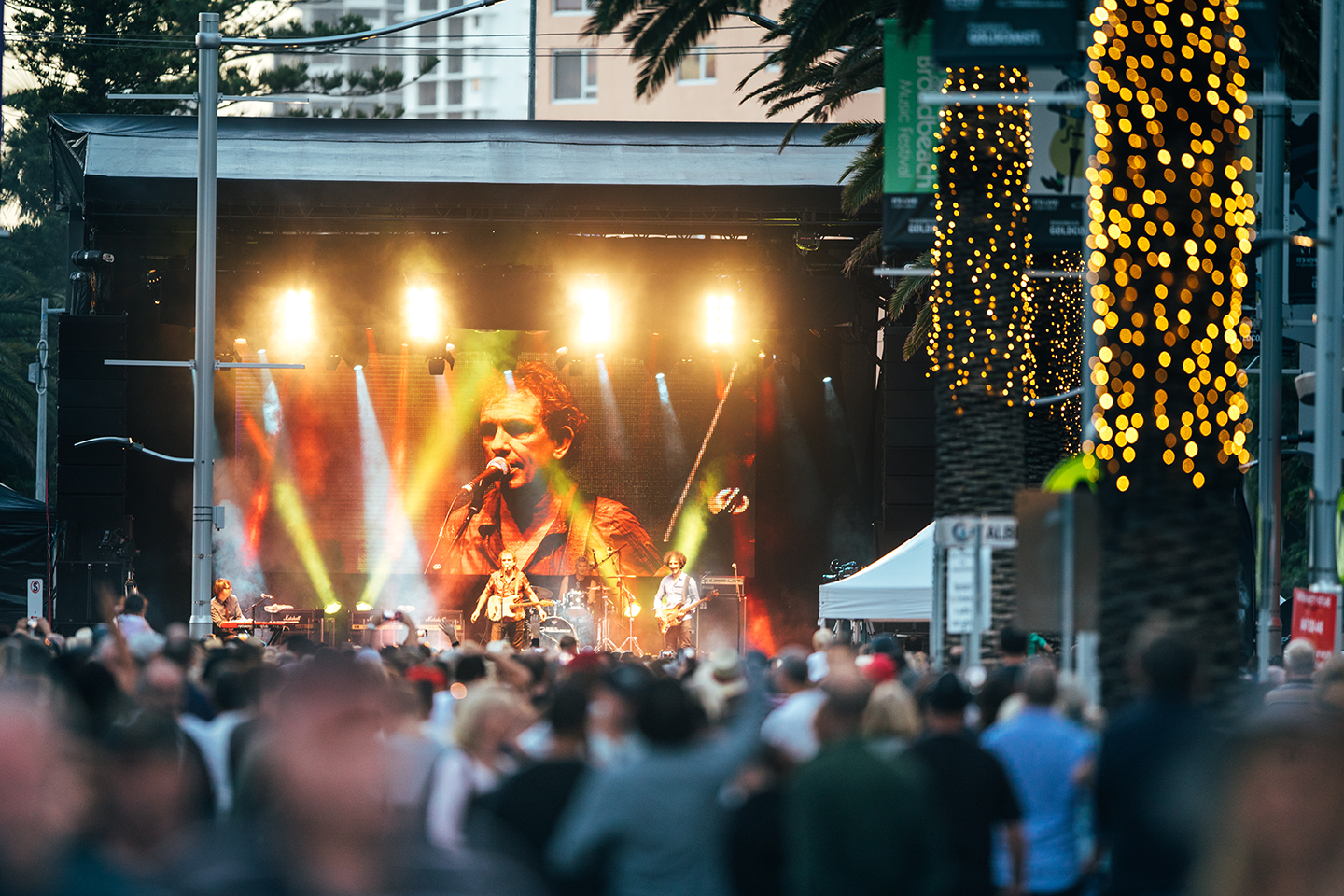 There’s never a dull moment on the Gold Coast, with our smorgasbord of varied events in stunning natural settings and world-class venues.

From the beach to the hinterland, from motor racing to music festivals, arts and culture to food and sports, it’s no wonder thousands flock from around the country to enjoy our iconic outdoor festivals, our idyllic sub-tropical climate, our spirit, our energy, and our friendly welcoming vibe.

Our action-packed calendar of events will get your adrenalin pumping and your spirit soaring. Simply scroll through some of the Gold Coast’s major event highlights to make sure you never miss a thing.

This buzzing week of racehorse sales attracts the who’s who of the racing industry in a quest to snare the next great champion racehorse. The Magic Millions Race Day features the richest race in Queensland and has become synonymous with Summer on the Gold Coast, beloved by buyers, punters and fashionistas alike.

For the Love | Doug Jennings Park

Music festivals are back and what better way to celebrate than For The Love’s bright and beachy beats for 2021. Featuring Flight Facilities, Mallrat, Cosmo’s Midnight, and Running Touch, to name a few, there are VIP lounges for those who like a bit of comfort, or the full sweaty festival experience, all set by the beautiful Broadwater.

Storyfest is the writers’ festival for the Gold Coast, loved by authors and audiences alike. The three-day celebration of literature, centred at Somerset College, Mudgeeraba, attracts A-list authors and inspires a love of story in school kids from around Australia. Storyfest also delivers a series of literary experiences for the wider community – with workshops, masterclasses, lunches and featured authors throughout the year.

The Gold Coast and beach volleyball are a match made in heaven. Australia’s elite, domestic Beach Volleyball finals play out on the golden sands of Coolangatta Beach each March, attracting Australia’s best athletes and international wildcards. Watch the sand and sweat fly as the best of the best spike, dig and block for supremacy.

The Gold Coast is synonymous with surf life-saving and the Queensland state championships attract elite competitors from across Queensland to do battle for pride and club amid the pristine sand and surf of Broadbeach, North Kirra and Kurruwa Beach. See surf life-saving’s greatest rivalries play out across a range of grueling and spectacular events that push the best Senior and Masters’ surf sports athletes to their limits.

Known as the triathlon for triathletes, the Gold Coast Triathlon brings together Australia’s best athletes while celebrating the life and legacy of local star Luke Harrop. The new Robina course offers fast and flat racing, with Spring, Enticer and Kool Kids options available, and a packed entertainment schedule for the whole family.

This celebration of Australia’s pop culture fandom, inspired by the worlds of comics, sci-fi, fantasy, anime and gaming, is the place to release your inner geek and inner child. Celebrities, fan clubs, exhibitors, artists and creators come together in a riot of colour, technology, collectables and cos-play, where new talent shines for an adoring public.

One of Australia’s premier ocean swims gives competitors the chance to traverse three of the Gold Coast’s most revered surf breaks – Snapper Rocks, Greenmount and Kirra. With turquoise waters, golden beaches and a stunning coastal backdrop, the Cooly Classic draws swimmers from all over Australia and offers a 5 km marathon distance for seasoned swimmers to test themselves.

With films, parties, panels, and pop-up cinemas at more than ten venues across the Gold Coast, the annual Gold Coast Film Festival delivers a feast of cinematic delights. Walk the red carpet, learn from leading producers, writers and directors at intimate seminars and workshops and be captivated by internationally acclaimed films of every genre.

Catch Australia’s best gymnasts on their last hit-out before the Tokyo Olympics and world championships in this two-week feast of superhuman feats. Six competitive gym sports will be on show across the 12 days of competition at the magnificent Gold Coast Sport and Leisure Centre, a purpose-built, architecturally breath-taking venue built for the 2018 Commonwealth Games.

Blues on Broadbeach has earned a special place on the Australian music festival calendar, as one of the largest free music events in the country. Spanning four blues-infused days and nights, with over 70 artists across 20 performance areas, Blues on Broadbeach showcases local and international acts amid a humming village of bars and restaurants.

The World’s Biggest Bowls Festival hits the lawn bowls capital of Australia, with $275,000 prize money across 700 prize money-paying places. Centred at the newly renovated Broadbeach Bowls Club, fresh from its Commonwealth Games triumph, competition is spread across up to 10 divisions and 13 venues, including some of the world’s best greens.

The 42nd edition of Australia’s premier road race attracts more than 27,000 participants of all ages and abilities across eight races. The flat, fast and scenic course takes in the city’s renowned surf beaches and beautiful Broadwater. Idyllic winter running conditions result in up to 60% of competitors recording personal best times.

Over 5000 of Australia’s top gymnasts, officials and support staff are again headed to the magnificent Gold Coast Sports and Leisure Centre for this annual, national clubs competition. Two separate events in July and September will see competition across all seven gym sports as the nation’s best gymnastics clubs battle it out for top spot.

Our city’s signature arts festival unleashes a wave of creative arts across the Gold Coast, as one of Australia’s most exciting, site-specific, contemporary arts programs. Bleach* celebrates adventurous local and international artists, utilizing our stunning natural landscapes and surprising venues, engaging broad audiences and creating a unique and authentic sense of place.

The pinnacle of international bowls comes to Australia’s home of bowls, the Gold Coast, in an elite, two-week tournament to anoint the world’s best bowlers. Broadbeach, Musgrave Hill and Helensvale bowls clubs will host over 240 competitors from 36 nations at the highly anticipated, quadrennial event.

With courses ranging from 130 km to five km, winding through the stunning Gold Coast hinterland, this event caters for beginner to elite level cyclists, as well as children. With the addition of trail running courses from two to 15 km, this is a true multi-sport, family-friendly event, named in honour of one of the world’s fastest sprint cyclists.

The world’s largest touch football tournament for secondary schools attracts over 445 teams and 6000 students, including 25 international teams, over five action-packed days. First staged in 1983 and being held on the Gold Coast for the first time, the round robin format incorporates 1500 games across 18 fields and draws between 6000 and 10,000 spectators.

For the first time, the Supercars Champion will be crowned on MacIntosh Island as GC500 provides the Supercars season finale on the challenging and scenic street circuit of Surfers Paradise. The premier motorsport category in Australasia never fails to deliver, as spectators flock to the three-day extravaganza of motor sports action.

The legendary Coolangatta Gold is one of the most storied and challenging endurance races in surf sports, staged along the stunning coast between Surfers Paradise and Coolangatta. Open to the public, it consists of a 21 km Short Course and a 41.8 km Long Course race, combining swimming, running, board paddling and surf skiing.

The country comes to the coast for three days of world-class country music in this free festival centred around the pristine beachfront of Broadbeach. Australia’s fastest growing country music festival brings banjos to the beach and steel guitars set to the background sound of the surf, all staged in the bustling hub of Broadbeach’s popular cafes, bars and restaurants.

With over 15,000 athletes from 40 countries, this is Australia’s largest multi-sports event, returning to the world-class sporting facilities of the Gold Coast, including many Commonwealth Games venues. The world’s biggest and best biennial masters’ games showcases 40 individual and team sports for athletes over 30 across two weeks of non-stop sporting action.

Stadium rock is back! Guns N’ Roses kick off their Australian tour at Gold Coast’s Metricon Stadium with all the power and spectacle we’ve come to expect from one of the world’s great rock bands. Axl, Slash and Duff are sure to thrill old and new fans alike with their peerless catalogue of blistering hits.

The largest school-based sporting event in the southern hemisphere brings 551 teams from 150 schools to the Gold Coast for its world-class facilities and idyllic coastal lifestyle. The Schools Cup has produced almost all national players for beach and indoor volleyball for three decades, so discover the next generation of stars over a fast-paced week of competition.